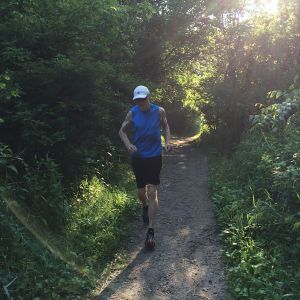 I did not decide when I was young to develop an exercise routine that I could stick to the rest of my life. Foresight was not involved. But at almost 66 now I can look back and say I’ve been doing some things for the majority of my years. It might sound like I planned it that way but that’s not the case. When you develop a habit or ritual that you’re comfortable with and enjoy, the years just begin to pile up on their own.

I was not enough of an athlete to play on a team at any level above grade school but I loved sports when I was growing up and I played them whenever I could. At 30 I realized I needed to do something that would fit with my work schedule. Running was the easiest form of exercise I could participate in regularly and that would give me some fitness benefit without requiring infrastructure and coordinating of calendars. I didn’t realize the many other ways it would help me as well, particularly mentally and emotionally. Stress relief and confidence building are two of the bonuses. Runners often feel a glorious inspirational solitude during a long solo run. There is also strong sense of community and camaraderie from participating in group runs and running with a friend. You get to know strangers by their faces because you see them at every day or every other day. Those are side benefits of a simple recreation and a small investment of time.

I didn’t know it when I started but Houston TX, where I lived then, had a large and growing running community. The most popular running routes in the city began and ended in a large inner city park that was the closest thing to wilderness in that otherwise concrete and steel habitat. It was a shady place to gather even in the hottest and most humid days of summer and it was used by several thousand runners a day year round. Some times the wide running trail would get so crowded that passing slower runners and walkers took some patience. The most serious runners ran early in the morning to avoid the crowds. I made me happy to see the same faces day in and day out, year after year. Not knowing someone’s name didn’t keep you from developing a connection. There were many people I spoke to regularly that never became more than a friendly face. I saw people on my runs from all walks of life and the widest variety of funny quirks. Out on the trail it didn’t matter what you did for a living or whether you were rich or poor, elderly or young, you were just another person in shorts and running shoes.

I joined a running club because I kept running into the same group of runners on my weekly long run and I liked them and I drank their Gatorade and water they stashed for club members along the 12 mile route. Their motto was “there’s nothing that a 10 mile run can’t cure.”

For a couple of decades I cared about how fast I was running, timing myself and doing speedwork, tracking improvement or not, but those days are long gone. It was fun to run fast and I treasure those memories. In my 40s and 50s I enjoyed pushing myself even if I would never win my age group in a race. Occasionally I would run with older runners, friends in their 60s who had slowed down to a pace that was hard for me to find a comfortable stride but I enjoyed their company and stories. Now that I’m in my middle 60s I too have become quite slow. But I still love getting out now and seeing how much cold, snow and wind I can tolerate and what the day will bring. I love the steep hills of my favorite trail that take everything I’ve got to climb and force me to walk a while sometimes to catch my breath. I have a good day even when it feels like I can barely move my joints for the first mile or so, then things loosen up and I start feeling more comfortable again. Runners tend to find joy in small wonders and now all it takes is a bird call I don’t recognize to stop me dead in my tracks. So in a way I’ve begun to combine the love of running with the love of discovery, whether it’s a bird I don’t know or a species of grass I’ve never seen or an insect I want to look up when I get home.