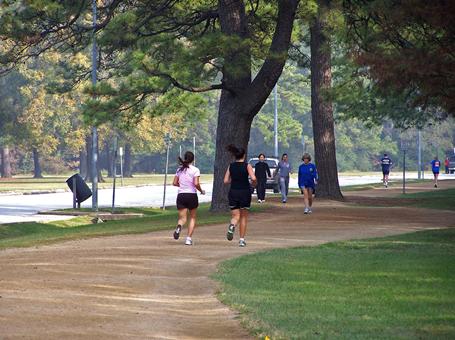 For many years it has been a place I could go
without having to drive for hours
where the predominant features were woods,
a large bird population that included corvids,
owls, a variety of song birds, a few raptors,
coyotes, armadillos, raccoons, and wild rabbits.

At 3:30am when you’re one of the first runners on the trail
you could see large numbers of rabbits feeding
on the open areas of grass at the edge of the trail,
risking encounters with the predators patrolling the area
before the numbers of humans swelled beyond the level of comfort.
I fell into the habit of counting the rabbits every morning
as a kind of ritual to take my mind off the stress of the run.

There was a level of comfort there created by a trail that
evolved around the trees in one of the few natural areas in the inner city.
Millions of footfalls carving a path that meandered this way and that, weaving in and out
of oaks and pines, and probably a few hack-berry’s.
Over the decades the path and the runners evolved together
so that the thousands of regulars had the imperfections of the trail
imprinted on their brains, knowing when to run in the middle,
when to stay to the right, where to anticipate puddles.

From time to time an old friend would pass away, an icon removed,
lingering only in the memory of those who continued month after month
year after year to tread the path, to log the miles.
The specimen tree on the corner that marked mile 2
the ones sprinkled in the middle of the path that gave us shade
and a semblance of wilderness.
The winds of hurricane Ike brutalized the trail with a level
of destruction that changed it permanently.

But Ike was merely a warning of what further potential change could happen.
2011 brought a hazard that was so easy to ignore
so easy to expect that normal weather patterns would return
and with economic pressures calling for no unnecessary spending
easy to place priorities elsewhere.
So again climatic changes and weather events are dealt with
in strictly reactionary measures while this little area
of public land, the closest thing we have to nature in an ocean of private property
is now a wasteland, forever changed from the place that gave so much delight to so many.

What will happen to it now is hard to imagine
much of what was wooded, shaded, quiet and peaceful
has become completely open, exposed to sun and heat
noisy and without sufficient shelter for the wildlife
that called the woods home?
Some replanting will probably occur from donations and fund raisers.
Small trees will be planted as an effort usually referred to as restoration.
Though many of us will never see the trail truly restored to a condition
remotely resembling the gentle path we knew so well.